Creating ‘The Room of Listening’ for the Syrians, Jordanians and Palestinians, Muslims and Christians these days inspires discussion, dialogue and new input. Or as Jimi Hendrix puts it: ‘Knowledge speaks, but wisdom listens.’ The social psychologist in me notices that a bridge seems to be missing between the social context and cultural habits of daily life on the one hand and politics on the other. The image of life and people in the Middle East is overly politicized and not only in the West, affirming mainly the negative. This creates lots of distortion and a lack of trust. Indeed man by nature is a political animal -Aristotle already knew- but why do all the discussions in blogs, newspapers and on TV have to be about politics? Aren’t they reaching a dead end leaving people behind powerless and feeling hopelessly disconnected? Or as they say here: ‘Kalaam fadi,’ empty words without effect or substantial change. A lot of people here seem to have accepted that nothing will ever change or have lost hopes of a change for the better. ‘Look at Syria especially today, Look at Egypt last week. Why bother?’ It is challenging to move from influencing situations on a personal level to changing codes, intricate political systems in society without losing the way. Particularly if you don’t have the status or financial means but are basically working around the clock to earn a living. As I all too often overheard people in Syria and Jordan sigh: ‘We’re simply too tired and too poor to be able to change anything. By the time we finally get home we want to sleep.’ The last remark being extremely painful in the context of the chemical attacks today on Syrian civilians mainly women and children in Al Ghota. Countless numbers of ‘sleeping’ children on the floor of a room or as a NMSyria wrote on Twitter: ‘The most disturbing thing about chemical weapons- they leave no blood, no wounds. Just people that look fast asleep.’

Moved by what must be the huge grieve of those affected I try to refresh my mind in the waters of a local swimming pool in Amman. Young boys are showing off their masculinity by bragging over who dares to jump off the highest diving board. A mermaid in a turquoise bathingsuit moves her flippers through the water almost like a dolphin transforming into its shape. Evaporating from the confines of daily life into a world of dreams and stories the mermaid seems happy. Is this why the Arabs have this oral culture full of poetry, stories and storytellers? Do they offer an opportunity to escape from the impossibilities of daily life like some kind of coping mechanism? Aren’t we all fugitives from the limitations of our own minds and societies?

‘Live free or die,’ I read on a van in front of me on the way back home. It brings me right into a story about Syrian fugitives. Twentyfive young men escaping from Palmyra walking through the desert on their way to Jordan. One of them, Kareem. I meet him somewhere near the Jordanian border. Tears well in his eyes. ‘Imagine we were being chased by the Syrian national army as if we were terrorists while we were actually demonstrating with olive branches. Reluctantly we were looking for a place to hide. It was the middle of the night. Alhamdulillah, Thank God we arrived at the house of a bedouin Sheikh who welcomed us to stay till the next morning leaving at dawn. In the middle of the night the army discovered us and a big fight broke loose. We all rose to our feet getting ready to help but the Sheikh ran in saying firmly: ‘No question about it you are our guests. Now all of you stay inside keep your heads down and we will take care of this.’ An hour of fierce fighting shook up the peacefulness of the desert and was followed by an eerie silence. We waited in fear. After some time the Sheikh came back in. ‘Ma sh’Allah, with God I am so happy you are all safe now, we managed to chase them away.’ By then Kareems teers were flowing freely as he explained that the Sheikh lost both his son and brother in this fight of protection.’ 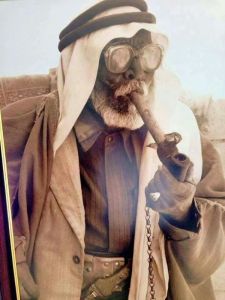 I just have time to catch my breath before Kareem continues with another story. While a tissue is drying his tears he seems to transform into a hakwati, the storyteller who would come every week in the centre of Damascus sitting on a big chair drawing the audience in. We travel back to Ottoman time. Fil waqt Ibn Sumer, it was the time of the son of Sumer… In this time the people wore ‘tarbushi’s‘, the famous Turkish red fez on their head. It is as if Kareem is trying to give his own story a place in history.’Did you ever hear about Slaj? He was a famous Arabic warrior, a hunted man at that time by the Ottoman army. Slaj sought refuge in the camp of an Arab bedouin. The army came to visit asking if Slaj was there. The bedouin said no to the army and sent them away. The Ottomans came back saying: ‘We know he is hiding in your camp, please hand him to us.’ Again the Arab turned them down for the second time. Then finally the army came back a third time putting a lot of pressure on the Arab. Finally the Arab capitulated and said: ‘Ya Allah, Oh my God bring me Slaj.’ He handed Slaj to the army saying: A’la tarbushi, a greeting that is still in use expressing respect something like: I take my hat off for you. Slaj was taken into the Ottoman prison. One of the torturers was confused about the identity of Slaj. He spoke to his master. ‘I have seen this man before, this man is not Slaj.’ It turned out that he was in fact the son of the Arab. The Ottomans’ sense of respect and honour was deeply touched by this offering. They decided to set the son free and send him home.’
These old traditions of honouring guests are still alive not only in Syria but also in Jordan, Lebanon, Palestine and parts of Iraq: Bilad as-Sham, or Greater Syria as they called the region here, the time before the Sykes-Picot Treaty. Consider for a moment that this truly is the deeper mentality of our neighbours. Europe’s neighbours. The Enigma of Greater Syria revealed.