Eye of the Storm

Following the deadly chemical attack on many more than 500
Syrian civilians in Al Ghouta yesterday, the atmosphere of devastation today
here in Jordan is tangible. People are mourning. There is a kind of
numbness in the day just like after an explosion when you don’t hear
anything and everything seems to move slower. 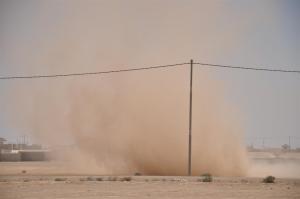 Some people cannot believe or don’t want to accept that it actually
happened. Others respond desperately crying out loud: ‘Those animals.
Doing this to our children, the jewels of our society. What has to happen
before anyone puts an end to this hell?’ Although it is offcially unclear who is responsible for the attack and exact numbers aren’t available countless numbers of mostly children and women have died and many have been injured.

Meanwhile the pressure on the Jordanian border is mounting. UNHCR announced that the influx of refugees is increasing because of the fear for new chemical attacks, while the funding to actually help and support the Syrians doesn’t cover more than
48% of the needed budget. In Lebanon today more than one million Syrian
children officially have been registered. In the Jordanian refugee camp
Zaatari, now the fifth biggest town in Jordan with over 180.000 Syrians,
the devastated crowd transformed into emotional demonstrators rioting here
and there. The Jordanian government had to close the camp
in order to maintain security in the area.

In the sorting center of Helping Syrian Refugees in Jordan two people
are lying down on top of more than fifty bags of donated items,
that still need to be sorted. Toys, shoes, diapers, clothes, everywhere.
The atmosphere is heavy. It doesn’t take long before we are all crying.
Everything seems pointless. Yesterdays image of more than fifty dead
children lying down on the floor of a schoolroom is haunting me.

In tears, Fadi reports about the rising pressure in Mafraq. Three different accidents happened showing the rising tensions. A Jordanian boy and his father were killed by a Syrian, a Jordanian student was shot when she walked out of his school by another Jordanian and some shops have been damaged because a Syrian family lost their son. They got so upset that they got rid of their grieve by breaking some shop windows. The advise Fadi got from friends in Mafraq is to stay in Amman. Tomorrow we were about to deliver milk powder and diapers to the team of the Alliance church of Father Light. The tensions are palpable. Jordan is in the middle of the eye of the storm. The government is trying to remain calm, providing stability, safety and hope for so many in the region.